Beyond restitution: New book explores property rights and durable solutions for the displaced 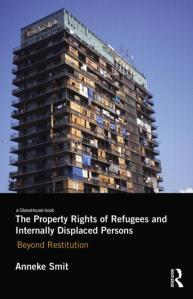 Anneke Smit is Assistant Professor in the Faculty of Law, University of Windsor (Canada), where she teaches Property Law. She has worked on displacement and post-conflict property issues for more than a decade, including in Kosovo with OSCE and in Georgia with a grassroots human rights NGO. She is the author of The Property Rights of Refugees and Internally Displaced Persons: Beyond Restitution, published this year by Routledge.

Recent posts in TN by Roger Duthie and Megan Bradley as well as Rhodri Williams, highlight the importance of transitional justice in bringing displacement to an end and encouraging processes of reconciliation. Yuliya Alieva’s post on the two decades of internal displacement in Azerbaijan is a critical reminder of the intensifying need to consider the full range of durable solutions – local integration and resettlement in addition to return, in particular in protracted displacements. These discussions reinforce the importance of post-conflict housing, land and property (HLP) restitution to contribute to these processes, but they are also reminders of the limitations of the current international legal framework.

2.1 All refugees and displaced persons have the right to have restored to them any housing, land and/or property of which they were arbitrarily or unlawfully deprived[.]

As such, the Principles prioritize restitution “in kind” (or in rem) as the preferred remedy to conflict-related HLP rights deprivations. Other remedies, including but not limited to compensation, are possible but these are clearly subordinated to return of the actual property. Since their inception, the Pinheiro Principles have been discussed and publicized widely. At first, it seemed taboo to criticize the Pinheiro Principles, given the substantial and hard-won contribution they made to a critical area of post-conflict justice and solutions to displacement. Recently, however, it seems the floodgates of criticism have opened.

Rhodri’s recent blog post on the UN high level rule of law meeting alluded to the place of HLP restitution within the framework of rights-based humanitarianism; in what I find a particularly compelling warning about that movement, Hugo Slim wrote a few years ago in a paper for ODI that “as a debate essentially concerned with a political, moral and legal framework, rights-based humanitarianism may never leave the paper and seminar rooms where it is debated and find the means to have a practical effect.” This is, of course, the crux of the problem with the Pinheiro Principles – they are a lovely piece of work on paper but one which in many cases has had trouble achieving a significant practical outcome. Much of the criticism seems to point to this question: are refugees and internally displaced persons (IDPs) actually better off for the existence of the Pinheiro Principles?

I am a pragmatist at heart, but one who does not believe we should throw the human rights baby out with the bathwater. In Beyond Restitution my critique is two-fold. First, I argue, through a discussion that includes consideration of the development of the rights to HLP restitution and return, analysis of a dozen post-conflict case studies, and consideration of the meaning of “home” in the context of forced displacement, that the desired results of return and reintegration could not have been expected to flow directly from Pinheiro-style restitution. Second, I take this analysis as a springboard to address how the post-conflict HLP framework might continue to develop in a way which more effectively contributes to durable solutions, without losing a necessary link to transitional justice and reconciliation. I outline two of my primary arguments here; the book of course treats them in more detail:

1. The Principles must retain a focus on durable solutions

The June 2012 ICTJ/Brookings Report on Transitional Justice and Displacement calls restitution of HLP rights “the form of redress perhaps most directly connected to displacement”. Amongst forms of transitional justice, HLP restitution has the potential to effect a particularly practical result in that the restitution of one’s home may be a critical step in making return possible. The Principles’ divorce of the right to HLP restitution from decisions about return or non-return may have made legal and procedural sense, but we should still expect to see some tangible results for refugees and IDPs coming out of the restitution process. If that tangible outcome is meant to be sustainable return, then implementation of Principles-style restitution must be accompanied by other return support programmes, as compellingly argued in David Attanasio and Nelson Camilo Sanchez Leon’s recent paper on restitution based on the application of the Pinheiro Principles in Colombia.

And as Alieva portrays, when we talk about durable solutions, increasingly we need to talk (and are talking) about the full range – not just return but also local integration and resettlement. It is regularly argued (usually by those developing or funding large-scale restitution programs) that restitution in kind may contribute to the viability of any of the three durable solutions by providing refugees and IDPs with a financial asset.

But the link to return remains far more direct than it is to local integration and resettlement (or integration in another part of the country for IDPs).  Alternative remedies for the loss of property such as compensation, alternative housing, or security of tenure in their current, “temporary” housing (e.g. collective centres), though largely excluded from the Pinheiro framework, may actually be of greater utility for some refugees and IDPs.

There are often political barriers to embracing remedies or approaches other than restitution in kind, but this can’t be the end of the story – for a long-term refugee or IDP, security of tenure in the host community becomes every bit as important as restitution of the pre-conflict house in an area to which return may not be a safe or viable option. Remedies other than restitution in kind have been accepted in the more broadly-focused 2005 Van Boven/Bassiouni Principles, as well as in the context of restitution for property deprivations during socialism, the Nazi era and apartheid in South Africa.

Both the Council of Europe Parliamentary Assembly Resolution 1708(2010) and the 2010 IASC Framework on Durable Solutions for Internally Displaced Persons mention compensation as a possible remedy for housing and property restitution, a sign that the tide may be shifting. In Georgia, following the 2008 conflict, politics met pragmatism as the Georgian government moved quickly to build new settlements for IDPs from South Ossetia, despite having refused to do so for the 250,000 IDPs displaced for almost 2 decades following the 1991-2 secessionist conflicts.

Shifting the focus onto all three durable solutions also means rethinking how we deal with the thorny issue of secondary occupation. Principle 17 of the Pinheiro Principles accords only procedural rights to secondary occupiers (proper notice before eviction, for example), rather than any right in the property itself. Yet regardless of the justness of the secondary occupier’s original access to the property, as time passes new realities are created. New concepts of “home” (a term still much better understood by sociologists and anthropologists than by lawyers) develop – both for the displaced pre-conflict owners and any secondary occupiers. Ties form to the property occupied. Equally importantly, communities grow up around those occupancies. Meanwhile owners may lose their connections to pre-conflict properties and communities in all but the most nostalgic sense.

The Principles’ hard line prioritizing restitution in kind, lacks the nuance to allow for decisions about restitution which both provide some sense of justice to the pre-conflict owners acknowledging these new realities. In this way it risks creating new injustices while trying to turn back the clock.

2. The basic character of property law should guide us

Further, rather than being a barrier to a more flexible approach, a more careful look at the character of property rights may actually provide the necessary template and justifications. It has always confounded me that while we talk about property restitution as an element of international justice (albeit soft law), we are much less likely to ground our discussion in the larger discourse of property rights and property law principles.

The bright line approach of the Pinheiro Principles (i.e. protecting one set of interests over all others) does not accord with how principles of property law function in virtually all legal systems which recognize private ownership. There are some things that property lawyers know which should have colored the formulation of the Principles. In particular:

Property rights are a messy intertwining of interests. Common law theories of property have used a variety of conceptions of these interlocking rights, including the long-popular, if increasingly challenged, “bundle of sticks” metaphor (a piece of land may be conceived of as a bundle of sticks, with each stick representing a different right in property). Civil lawyers may use different metaphors but similarly recognize that different interests in one piece of land or item may exist simultaneously.

For example, the principle of adverse possession (sometimes informally known as “squatting”) is one means by which competing interests, in this case one “formal” and one “informal”, are regulated in both common law and civil law jurisdictions. Adverse possession principles dictate that a formally held right in property may be extinguished after the passing of a given number of years of uninterrupted possession by another party. I do not mean to oversimplify this – there are many important differences between adverse possession and secondary occupation, which I discuss in the book, but it is still a useful starting point.

Property rights are not absolute and may be infringed for the public good.  Although the right to property is included in most national constitutions, the right may be infringed for reasons deemed in the “public interest”, for “public use” or for the “public good” depending on the country. The state may transfer title to itself, on payment of compensation to the private owner, a process known as expropriation, eminent domain, compulsory purchase or simply “taking”.

In Windsor, Canada, where I live, for example, close to 900 land-owners have recently had their properties expropriated to make way for a highway leading to a new Canada-US border crossing, the construction of which is considered to be in the public interest. Many are not happy about it, but this has been done according to law and home-owners are meant to have received fair-market value for their properties.

The laws of urban and land use planning also recognize that private property rights may be infringed in lesser ways, with or without compensation depending on the country and the extent of the infringement. For example, property rights are subject to limitation by municipal and other urban planning laws and decisions.

Post-conflict urban planning to create liveable cities and useable public spaces is a relatively small but growing area of focus for planners, politicians and lawyers (we have touched on this with our work on property in the Old City of Jerusalem through the Jerusalem Old City Initiative (JOCI)), and for academic study (see in particular the Cities in Conflict project). Thus, even in non-conflict-stricken areas, the enjoyment of property rights sometimes has to give way to other interests.

It is understandable that the already formidable task of creating a nuanced approach to protecting and balancing property rights becomes far more difficult following armed conflict. However, given the complexity of post-conflict property realities (tangled and competing rights in property, land reform, urban redevelopment and development programs), coupled with the social realities described above and the need for feasible durable solutions, it may sometimes make sense to set aside restitution in kind in favor of other remedies or land reform programs.

3 responses to “Beyond restitution: New book explores property rights and durable solutions for the displaced”