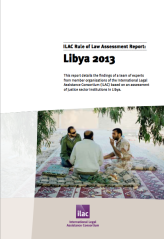 I am very happy to announce that the International Legal Assistance Consortium (ILAC) has just published a new report based on the rule of law assessment I helped to organize last January in Libya. While I had a hand in writing the report, it is the product of a fruitful collaborative effort with the assessment team members, all of whom were experts representing ILAC’s member organizations. A pdf version of the report, as well as summaries in English and Arabic, can be accessed here.

The ILAC report focuses on the role of core rule of law institutions such as the private bar and judiciary, and sets out recommendations for enhancing both their independence and their effectiveness in a new, democratic Libya. A very important part of the report’s analysis focuses on how the legal system is affected by the current transition, and notes the dilemma for the judiciary in particular – in that regular courts are both saddled with the delicate task of bringing those accused of crimes in connection with the 2011 uprising to justice and are themselves likely to be the object of vetting efforts in connection to the role that some judges played under the Gaddafi regime.

Despite the rule of law focus, in other words, the report delves into a number of transitional justice issues, most notably prosecution and institutional reform. In this sense, it complements the earlier work I did for UNHCR on property and displacement issues, which approached the transitional justice debate in Libya primarily from the viewpoint of victims’ reparations. Our report also comes hot on the heels of the latest by the International Crisis Group (ICG), which focuses squarely on the current showdown between the state and judiciary on one hand, and revolutionary brigades on the other.

As I write, in fact, Libya appears to be emerging from its latest and most open showdown between revolutionary legitimacy and democratic accountability with its government institutions battered but largely intact. As those of you following the magnificent Libya Herald will be aware, the current crisis erupted over demands that the General National Congress (GNC) pass a law allowing individuals associated with the Gaddafi regime to be excluded from public office. Tensions had been rising for some time in Tripoli as heavily armed revolutionary brigades converged from other parts of the country and engaged in a series of threatening and occasionally violent protests in favor of quick passage of an extensive ‘political isolation law’ (PIL).

The political isolation law that was passed last Sunday appears to be more narrowly tailored than earlier drafts that were so overbroad that some observers queried whether they were quite simply aimed at resolving political rivalries by removing entire parties from democratic contention. Concrete suspicions remain regarding political agendas behind the current law. Moreover, despite protestations to the contrary, the law was passed in a coercive atmosphere following several occupations of the GNC, an apparent attempt on the GNC speaker’s life, the kidnapping of an aide to Prime Minister Ali Zeidan, and repeated militia incursions into the Ministries of Justice, Finance and Foreign Affairs.

The government’s failure to control the protests can be read as both a sign of its weakness but also its forbearance. The militias still probably hold the balance of military power and command a great deal of public sympathy for their role in the 2011 uprising. However, there were also significant counter-protests in Tripoli against the brigade’s ‘soft war‘ on the ministries. Based on an orthographically-challenged graffiti, revolutionary proponents of radical vetting have become known as ‘mouq-mouqs’, a slightly comical appellation that sits uneasily with their record of violence and threats (including both attacks on anti-brigade protesters in Tripoli and the creative use of hand grenades and light firearms in the course of negotiations with Mr. Zeidan).

It is hard to speculate on exactly what the effects of the law will be. At the political level, it is unclear whether the passage of the PIL represents the zenith of the revolutionary brigades’ influence or just the beginning. Some argue that the militias, having institutionalized the revolution through the PIL, now have no further justification for not standing down. However, some militias appear to differ. In the days since the PIL they appear to have appointed themselves the arbiters of the law, interpreting it to require the Prime Minister to step down and continuing to blockade ministries until their staff are deemed clean as well.

Details remain somewhat sketchy about the law itself, at least for non-Arabic speakers, although Human Rights Watch gave an overview just before the vote and the Libya Herald described the law as passed. Leading liberal politician Mahmoud Jibril will almost certainly be banished from politics for ten years as a result of his attempts to change the Gaddafi regime from the inside when its survival still seemed assured in the late 2000s. Mr. Jibril himself has claimed that as many as a half million other Libyans may also be excluded from political life, giving credence to those who predict a potential debacle on the scale of Iraqi de-Baathification.

Meanwhile, as Human Rights Watch and others point out, the passage of the PIL consolidates two trends that sit uneasily with the rule of law. Beyond the fundamental risk that militias may mobilize again in support of other pieces of favored legislation, the new body created to implement the PIL is likely to continue with a similarly non-transparent and procedurally dubious approach to that applied by the current vetting body, the so-called Integrity Commission. Second, the GNC passed an earlier constitutional amendment effectively blocking any review of the PIL by the Supreme Court. Exceptional or not, such legislation creates a clear formula for shutting down the judiciary as a check on the power of the political branches.

The risk is that revolutionary legitimacy will spawn a form of revolutionary justice that can hardly be healthy for the country, either in the narrow application of the PIL or the broader precedent the manner of its passage sets for future Libyan legislative processes. In his Facebook musings on the PIL, one Libyan pointed out that the consolidation of the revolution risks permanently alienating large segments of society deemed to have ‘lost’ the 2011 conflict:

The law could set an alarming precedent about passing laws in revenge manner. I wish there were a law that would outline a reconciliation process for the wounded cities and tribes.

Indeed, as if to point out how thoroughly the national reconciliation process had been marginalized in the debate surrounding the PIL, the expelled residents of Tawergha, the allegedly pro-Gaddafi town that was levelled in the wake of the uprising, have announced plans to peacefully return on June 25. Although the fallout from the PIL will no doubt take some time to settle, its passage undoubtedly represents a significant step. As flawed as the law may turn out to be, its existence removes the last credible excuse for the Libyan government, judiciary and public to turn from the current constitution of their institutions to the means by which they will tackle the crucial rule of law and human rights challenges facing them.

Postscript: I recently had the opportunity to discuss both reform of the judiciary in Libya and resolution of the property and displacement issues in a panel sponsored by the Folke Bernadotte Academy and the Swedish Institute of International Affairs. The other panelists were Claudia Gazzini, who wrote the ICG’s recent report, and Jan Thesleff, Swedish Ambassador to Libya and Tunisia. The moderater was Swedish freelance journalist Bitte Hammargren, who keeps an excellent blog (in Swedish) on Middle East affairs and happened to interview me in a recent article on Libya for Svenska Dagbladet. Video footage of the event is available here.